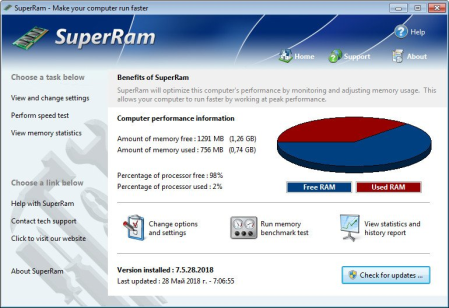 SuperRam makes your computer run faster by taking control and managing the memory on your computer efficiently.
If you notice your computer is running slow, this typically is due to the memory (RAM) running out of usable space. When memory space gets lower, Windows then starts opening programs into the Windows page file; this page file is the computer hard drive which is much slower than RAM. SuperRam switches this behavior and puts old programs into the Windows page file and any newly opened programs are put into actual RAM. This change in how Windows operates allows programs and games to run faster.
SuperRam constantly runs in the background on your computer and determines when the memory on your computer is getting to a low threshold; once it reaches this threshold it immediately frees memory back to the computer and makes programs run faster since they have access to physical memory. SuperRam's settings allow you to freely adjust and change this low memory threshold and give you the ability to determine how much memory to free back to Windows. SuperRam gives you full control over how memory works on your computer and allows you to fine tune how your computer operates.
Faster Applications
Applications and games instantly load and run faster than before since they have access to more RAM on your computer. This instantly makes your computer run smoother and faster.
Take Control
You are now in control of your computer and decide how the system works. SuperRam gives you instant access to control how the computer operates and then works in the background for you.
Always Running
SuperRam constantly runs in the background even if no user is logged in, works great for server systems and desktop machines whether they are in full use or idle.
Infinite Memory
SuperRam constantly frees wasted memory back to the computer giving the impression you have an unlimited supply of RAM available to your applications at all times.
SuperRam intelligently manages memory unlike many other memory management programs available on the internet. SuperRam monitors how much of your computer processor is being utilized; ensuring that it does not free memory when the computer is processing large amounts of data and cause slowdowns. SuperRam can also detect when a program is running full screen, such as a game or a DVD and prevent memory from being freed to also prevent the screen from lagging and causing video problems to occur. If you are using a laptop SuperRam can also be told not to run when the laptop is on battery power and only work when plugged in. These settings allow you to fully control SuperRam and dictate how your computer works.
If you notice your computer is running slower, trying our software SuperRam is as easy as ing the current version, clicking the install button and letting everything work on its own. SuperRam's simple to use interface allows you to set it and forget it, and let SuperRam automatically manage your computer's memory. However if you would rather take control directly, SuperRam offers many settings to let you decide how much memory to free, and when memory should be freed depending on CPU utilization, full screen applications running and many other factors. Download a trial version of SuperRam and make your computer faster.
Compatible with Microsoft Windows 10, 8, 7, Vista, XP & Windows Server 2012, 2008, 2003. 32-BIT/64-BIT ready.
Allows games and applications to run faster by giving them access to more physical memory installed on the computer.
Runs in the background, which allows the software to run quietly freeing memory back to the computer without user interaction.
SuperRam can even run when no user is logged in allowing server systems to free memory leaks or give server software access to more RAM.
Memory benchmark test feature has been added in to get an estimate of how fast and stable your computer memory is.
Full customizable settings allow users the ability to fully control how memory behaves empowering the user to control their computer.